These “fan mail” letters are my chance to geek out about brands that I love and share those brands with you, and I can think of none better to start off with than huge inspiration of mine, DKNG studios.


DKNG has reached design industry celebrity status, especially where Adobe Illustrator is concerned (my favorite program to use), and the guys behind the curtain are THE COOLEST DUDES. I have proof. But first, just to check, you know who they are, right?


DKNG is just two guys, Dan Kuhlken and Nathan Goldman, who formed a California-based design studio in 2005 and have since worked their way up to the top of major league graphic design. If you don’t know their work, you at least know a few of their clients; little companies like Warner Bros Entertainment, Disney, Marvel, Audi, Taco Bell, HBO, and Sony, as well as a mile-long roster of popular bands and musicians that includes Jack White, The Black Keys, Phish, The National, and many, many more. The full list is, quite frankly, ridiculous.


If you want some pictures to back up these words, hop on over to their website or instagram and feast your eyes. But then come back, okay? I have so much more to tell you.


I’ve looked up to DKNG for years, and have both directly and indirectly learned a TON from them. But, because I like lists and you probably prefer articles of the more concise variety, here are my TOP 3 things I’ve learned from DKNG:


I mentioned already that DKNG is just two guys, Dan and Nathan. In one episode of the Adventures in Design podcast they were asked if they’ve considered expanding their business into a larger agency. They have the reputation and client list to do so, in theory, and I imagine that applications would fly like confetti if they chose to take on additional partners or employees. Their answer: they like their business just how it is.


Dan and Nathan have been intentional about keeping their business small. They know they can work more and more hours each week and make a good deal of extra money, but instead choose to use their success to afford themselves less time in the office, and more FREEDOM, rather than just more dollars for the sake of dollars. They’ve reached a level where they can make good money with less work, so they can be choosier with the client work that they take on, develop more self-initiated projects and DKNG merchandise, and spend more time with their friends and families. They didn’t just follow the formula of "growth" = “success". Instead, they figured out what success means to them, and pursued that.


In an ideal world, I would love to take Pen & Mug in a similar direction. My loftiest dream isn’t a Mad Men-esque high-rise agency called Schulenburg, Schulenburg and Schulenburg. In my head, it’s a small “dream team” of multi-disciplinary legends working together to create amazing things.


These guys are some of the best in the game, but they don’t hoard their knowledge to stay on top. There’s no “secret recipe” that they fiercely protect – exactly the opposite, in fact. They teach their techniques and tips and tricks openly. They're asked to be featured speakers at massive conferences, lead other professionals in immersive technical workshops, and create an ever-growing catalog of training videos. By doing all this the guys have established a strong name for themselves, built up a new dimension to their business and income, and have earned the undying loyalty of so many who have learned from them (myself included).


Two things on this:


ONE – The design industry is a service industry to begin with. Finding new people to serve and new ways to serve them is the perfect way to grow and adapt in this industry. DKNG gets more recognition and passive income from doing all this, and the rest of the world loves them for it (and gets a hell of a lot better at Adobe Illustrator).


TWO – I’ve learned a LOT by attempting to mimic DKNG’s style, both through their video courses and on my own. The work always falls a little (or a lot) short of looking like DKNG themselves made it, but that gap is precisely the space where I’ve found my own style. It's a blend that includes many methods and tricks that I’ve learned from DKNG, plus many others from other places and artists, all stirred in with my own brain and eyes and experiences. (Brings to mind Austin Kleon’s book “Steal Like An Artist”).


However, there are others who approach this differently and view DKNG’s courses as the “right way” rather than an ingredient in their own style. This risk scares some people in DKNG’s position from sharing their knowledge, for fear of it being stolen or fear of their own “specialness” being lost. DKNG is not concerned. In their words, this reality forces them to keep learning and growing as well, never becoming complacent or comfortable in a false belief that they know everything they need to know to be successful forever. In addition to that, they're also confident in their own soft skills and “unteachable” abilities, and believe that even if someone else has all the same technical skills and methods they have, Dan and Nathan will still be able to create something unique.


I think that's true, and in a niche, design-industry way, pretty freakin' badass.


I had a chance to meet Dan and Nathan earlier this year at Creative Works Skills Camp, and I was concerned at first that meeting them might be a bit strange, since I already felt like I knew them from listening to their podcasts and videos. I also had a small concern that they might be a little “too-cool-for-school” in a conference environment where people had come from far and wide to meet them and learn from them.


Not the case AT ALL. They were friendly and funny and everything people say your heroes will never actually be if you meet them in person. I had the pleasure of enjoying a meal with these guys, bar-hopping a bit with them, and even playing drums with them (funny story), and they could not have been more fun to hang out with.


When I make plans for the future of Pen & Mug, or daydream about being a featured speaker at impressive conferences and workshops, I (now more than ever) think of DKNG. I hope to follow their path of success, cleverness, and general down-to-earthedness.


Thanks Dan and Nathan! 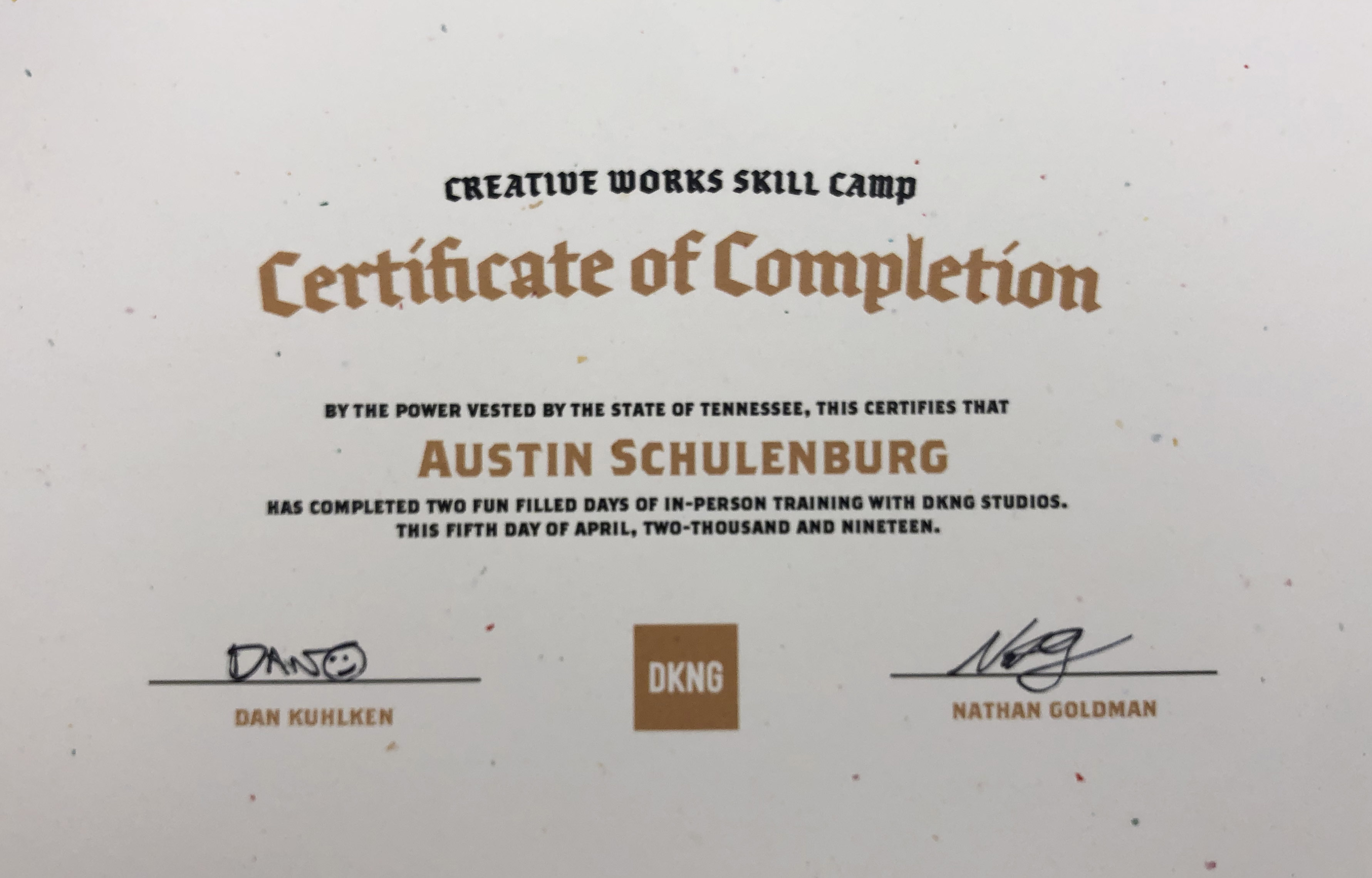 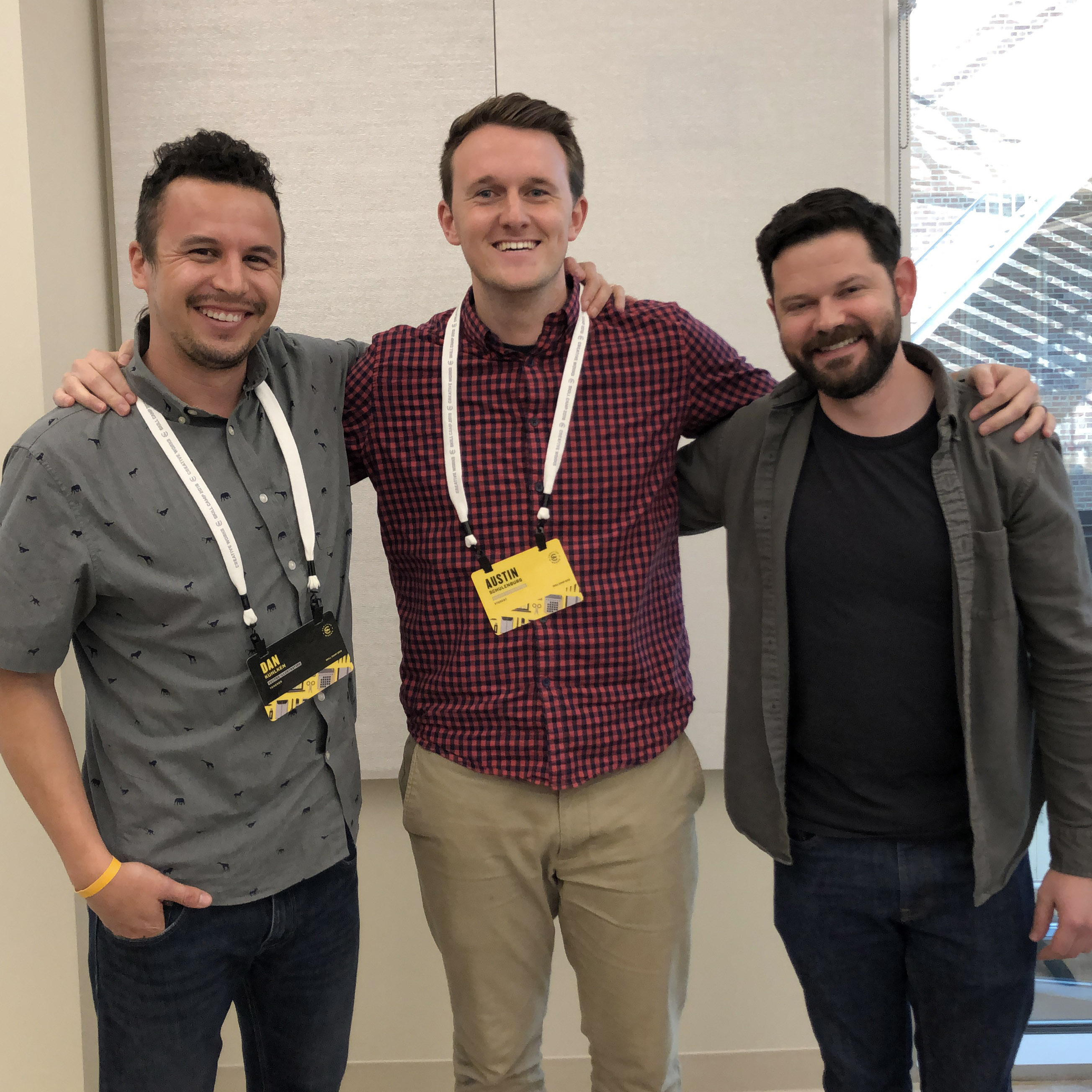 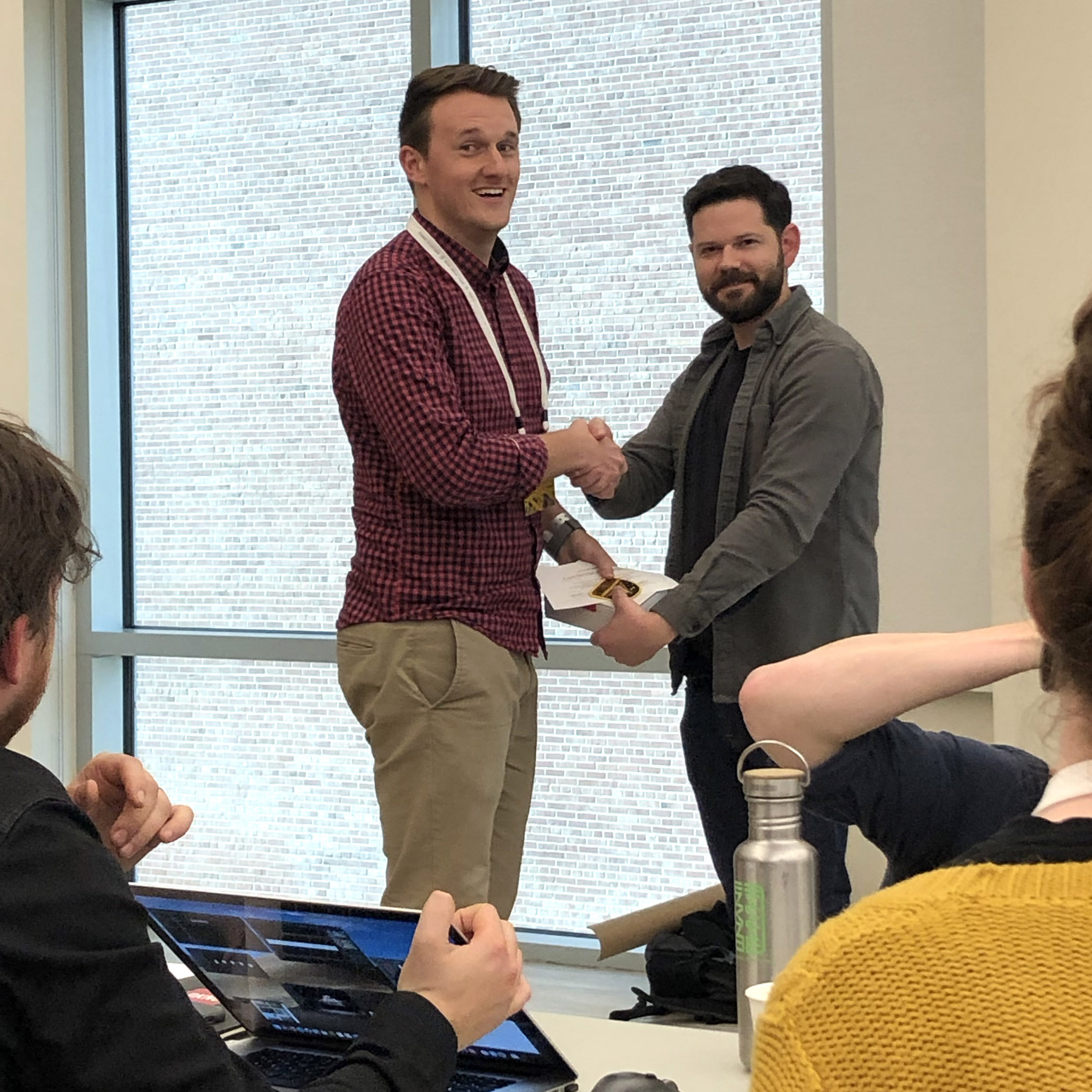 Closing thought: This is my first “fan mail” article, and it has been SO fun to write! Expect plenty more of these.

(The opinions expressed in this letter are Austin’s and do not necessarily reflect the opinions of everyone else associated with Pen & Mug, even though Austin clearly has very excellent taste.)